I’ve been meaning to put together a post of on-demand manufacturers for some time now, but it seems that True Up already took care of the fabric section.  She’s got a terrific chart comparing four of the most popular digital fabric printers on the web: Spoonflower, Karma Kraft, Fabric on Demand and Eye Candey.  The only problem is that this chart was created over a year ago.  Surely things have changed since then?  Anyone know of any new printers?  I wish it came in an updated annual version….

I know I didn’t post a separate thing for yesterday but that’s because I spent both days this weekend (and many others beforehand) finishing up my Yoka bear for the DKE traveling Custom Yoka show.  I made new things for it each day, so I think it still falls within the bounds of my commitment.  If you’ll recall, my initial string-art-turned-embroidery idea didn’t quite work out because the toy was too small to puncture or sew, so I sketched up a feathered griffin idea instead:

I basically stuck to this plan but I turned his arms into the wings and changed the colors a bit.  Here’s how he turned out:

I’ll take better photos when I have some time during daylight hours (I started a part-time day-job so that’s been tough) but I wanted to give you a sense of the process in the meantime.  First I made him a polymer clay beak and little claws (I used gold).  After baking I attached them with a two-part super glue for plastics from Loctite which worked extremely well.

Next I made him two polymer clay eyes (using white clay), which I fired, glued and painted in three colors using acrylics.  He looks cute and doe-eyed here, but watch out!

Next I used more polymer clay to make angry eyelids.  They flattened out a bit when I baked them, but they were so thin that I was able to bend them back into shape while gluing them.

While I was waiting for his eyelids to cook, I wrapped his arms in wire to make bendable wireframe wings.

I glued some felt on top of the wire so the feathers would have a base.  When it was dry I trimmed the excess (not pictured).

Next I cut out a million tiny felt feathers.  Mostly I used a teardrop-shaped hole punch that works on fabric — sort of.  It punched through the felt most of the way but every piece was still attached by a little piece at the bottom that I had to snip off with fabric scissors.

One by one I glued the feathers on his body.  I started with his feet and his belly.

I also glued little felt pads for the bottom of his feet.  They look white here because I overexposed the shot, but they’re really the same blue as the feathers on his belly.

I also added a tail, which is just 22-gauge wire wrapped in felt.  I poked a hole in his backside for it but I didn’t glue it in until the end, after I’d trimmed it.  By the end of the day on Saturday, his body was finished.  I cut a few feathers in half for the tufts on his “ears.”

Sunday was mostly spent on his wings.  The long feathers I cut out by hand.  I cut a bunch of skinny triangles from one long strip of felt, then rounded off the ends with my fabric scissors.  Ta-da!

I made everything so that his joints all still move. His wings are also bendable so you can fold them at his sides, make him take off, or have him swoop in for a landing.

Your instruction for today is: customize a small toy to make it way cooler than the original.  You can customize a blank vinyl toy (or even a roll-on deodorant), pick up an action figure at the thrift store, or turn that old carnival teddy bear into something way more bad-ass.

Your inspiration for today comes from a few of the other artists in the traveling Yoka show.  Some people painted… 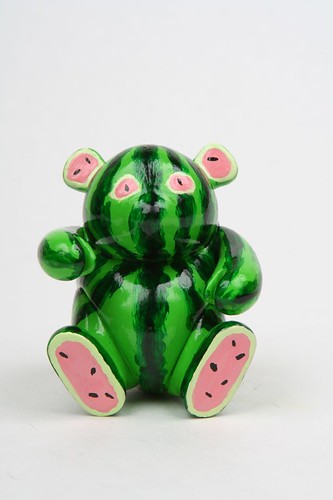 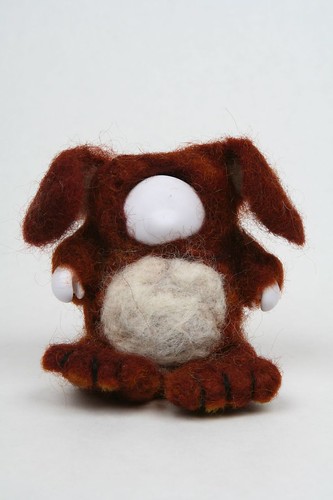 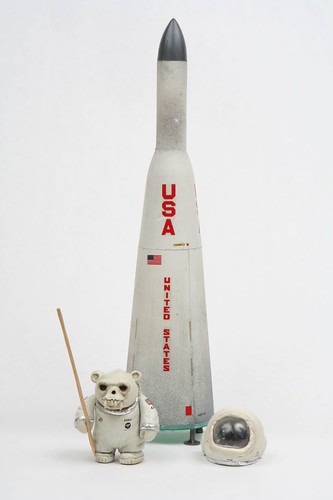 …and some people covered. 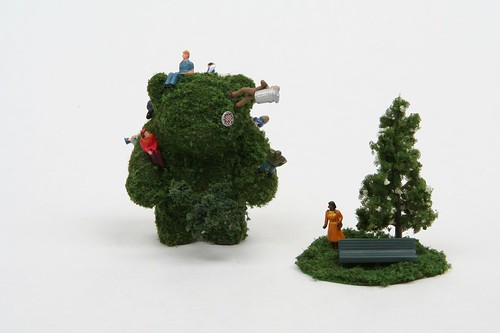 Some people had more ideas than time. 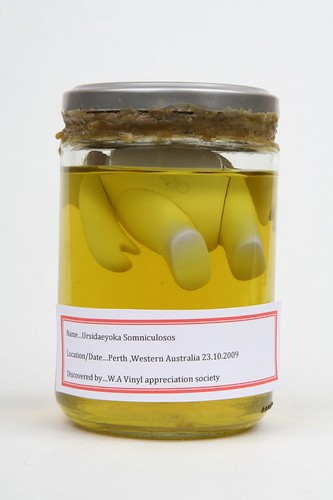 Ever since I was a wee bairn, I have loved making schnitzels.  No, not that kind of schnitzel (though you all know about my affinity for meat). I’m talking about teeny tiny paper and fabric bits.

For example, one of my favorite projects ever was this Paper-Aid recreation of Van Gogh’s “White Roses.”  I started it in college for an art class, but I didn’t finish it until more than two years later.  This image is pretty much actual size (the finished piece is 4” x 6”).

If you’ve been following this blog for a while, you may also remember the credit card wreath I created in which every leaf was made up of 7-9 individually cut, punched and wired pieces.  Yesterday I made a pile of little felt schnitzels with a hole punch and scissors.  I’d been gluing them steadily onto an ongoing project (of which I will post progress photos when I’m finished) when A. walked in and exclaimed, “My God!  You’re building a bird literally one feather at a time!”  Bliss.

Your instruction for today is: make some colorful schnitzels.  You don’t have to make them into anything, just create a lovely little pile and revel in it.